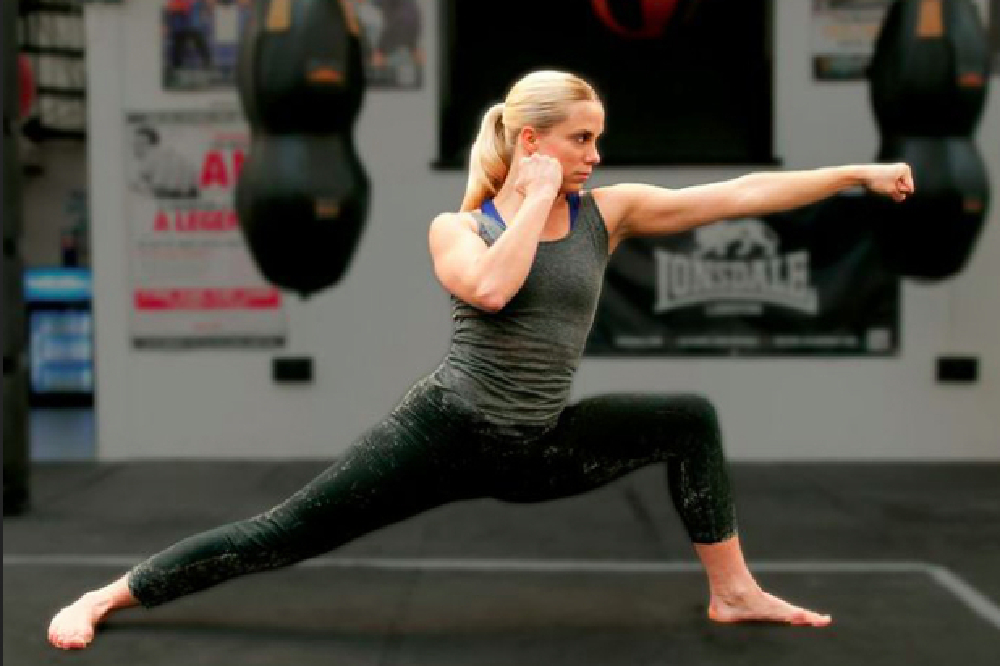 At first, I thought it would be stupid to practice boxing yoga as it doesn’t go with Ahimsa and the purpose of yoga. I made a mistake ! Again, it all depends on your intention, but you also need to understand what is behind the title : Boxing Yoga.

It is real because it is for you, for me, for everyone. It is boxing without agressiveness. It is yoga without mantras and prayers. It will become yoga at a deeper level for boxers and it will not become an agressive training for yogis.

When you meet Kajza, co-founder of this new trend, you understand why Matt invited her to try yoga. First because she is a powerful energy, when she smiles, she shines. Then he offered her the challenge to bring together Boxing and Yoga.

Beginning over 4 years ago, they now have many followers from around the globe, aficionados in a park every weekend with a Boxing Yoga session for free in London. This is a well designed Teacher Training that has many good intentions, predominantly the idea to Fight For Peace and at web YOGA TV, we like it.

Lost in the northern part of London, Hornsey Station is my stop. Coming out from the train station, I can’t miss it – the Boxing Yoga studio is right in front of me. I hear huhhh….. hahhhhh…. Hoooohhhh….boom, boom, boom … then a barking dog welcomes me and suddenly the temple of testosterone opens.

The sweat, the decor, the energy….. every sense is urging me to stay outside. Some boxers are leaving the studio. Then I remember my feeling when I left after my first yoga class, sweaty, light, smiling, walking on a cloud. These boxers left this studio with a great smile on their faces and such a welcoming attitude, that I felt uplifted just by crossing paths with them on my first day in London, in this not so exciting suburb, on this grey December day.

And when Kajza arrives, I start understanding about this adventure. It is yoga, with asanas, with intention, with efforts in non-effort, patience, benevolence and the same goal : to reach the inner part and unite individual strength and cosmic strength – whichever way you do it, do it with truthfulness, non-violence, discipline and without possesivness. Isn’t it what we start learning from our Yamas and Nyamas ?

Ok, there is no meditation, mantras, pranayam as we practice traditionally, but the great result is when boxers, policemen, British professional rugby players, etc,… start enjoying and discovering yoga and exploring it to the point of going further into traditional yoga.

Boxing Yoga is a very modern practice matching people’s needs and like most new products based on yoga, it is a trademark, it has a TTC, it makes money and has success as they open a new studio with one entire floor dedicated to Boxing Yoga in January 2017. They offer TTC via Skype (ok, we could wonder about the quality of pedagogy with classes via visio conference but sometimes it works) and they bring the best of boxing into the great dimension of yoga.

But I realized it is for everybody, for a nurse, a secretary, a fireman or a postman, the Swiss Olympic Judo team… I even saw a car mechanic and a dog-sitter practicing Boxing Yoga, all with a smile on their faces, men and women with good intentions – not to hurt, not to be violent, not to look for a way to defend or attack, but with a greater intention to be united in body and mind……like the two fists of the boxer, always close to one another. Even if… it is far from Yoga by the texts.

A good example of Boxing Yoga takes place in South Africa – in townships around Johannesburg, where it is taught to children surrounded by drugs and violence, and the link between the art of boxing and the power of yoga, brings a breeze of transcendence, elevating them much further than any social worker or any attempt to get them to change their lives. This is showing them that behind the so-called boxing spirit is something much bigger, much greater and much more powerful. But boxing remains a first step… to discover yoga.

I believe that all new trends of yoga exist to make people understand how powerful yoga is for each and everyone, but also, yoga needs to grow and adapt to people’s lifestyles. Boxing Yoga will play a key role in areas where society is violent, and here we will find a gateway to a respectful, healthy and non-violent lifestyle, so remember this name……. Boxing Yoga. It will make a difference where politicians don’t understand violence and offer no solutions. It started as a niche thing, it has now become a movement…….it will bring yoga into the most violent areas of our world to transform and empower each person. Isn’t that what yoga does?